At some point during my grandmothers teenage years she was employed at the Summerland Factory in Rouge Boullion, Jersey, Channel Islands. I know that according to her identity card , on the 16th January 1941, Grace was employed as a machinst.  Jersey was being occupied by the Germans at this point.

I haven’t been able to find out much about the factory, unfortunately. I did send the photo to the J.E.P. a few years ago in the hope that they would put it in their Temps Passe section. I never heard back from them, which is a shame and not the first time they have failed to reply. It is a shame on the grounds that I sent it when  two of my grandparents were still alive, and therefore so would have been more of their generation. It is possible quite a few locals might have written in to give some very useful feedback and memories. So, I use my blog, this website to share these resources with you.

On the website jersey.com there is a little section about the conditions of everyday life during the Occupation, here is an extract from their page about shopping and a mention of the Summerland factory:

Shopping hours were reduced to 10 am – 12.30 pm, and 2 pm – 4 pm, as goods became scarce. Textile shops were open only on Tuesdays, Fridays, and Saturdays. They received limited supplies from France, the Summerland factory in Rouge Bouillon, and from local residents. Textile factories were re-opened to provide employment for local women, as well as supplying much needed raw materials.

So these women in the photo above would have had an awful lot of work on their hands. I do not know what work they did exactly although there is a possibilty they made the ‘Jerseys’ and the ‘Guernseys’ jumpers that were often seen worn on the local fishermen. I would love to hear from someone who is more knowledgeable than me in this area, so please fell free to contact me.

The fantastic thing about this photo is not only the image itself, but on the back my grandmother had written down everyone’s name! 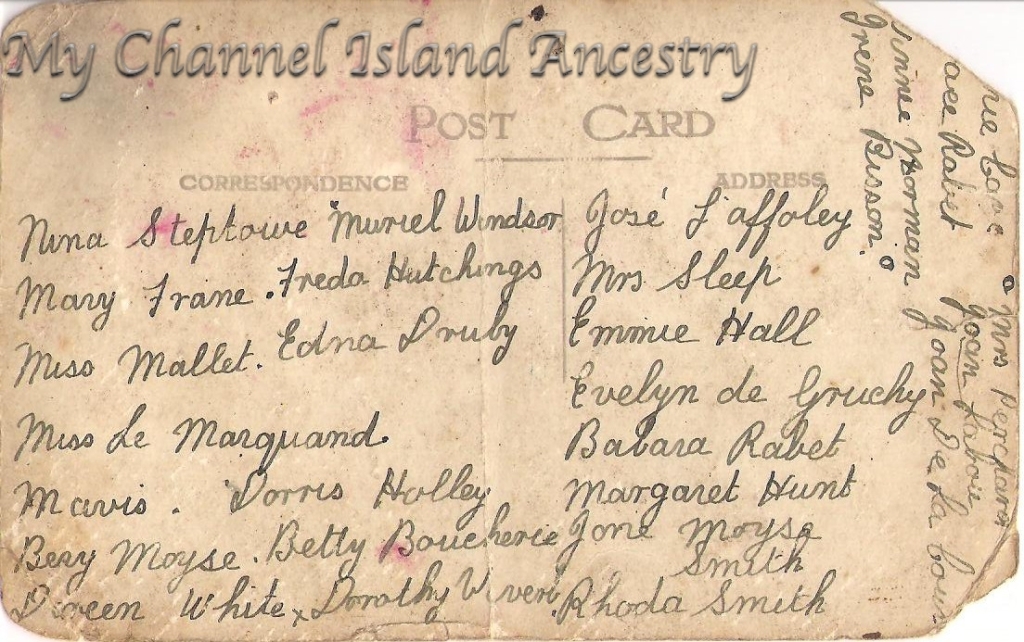 My grandmother’s sister Barbara Rabet is also on the photo in the 2nd row, second from the left. I even think that Betty Boucherie that is in the photo is the sister of my other grandmother Edith Bouchere.

Here is a list of the names I could decipher:

UPDATE: Since writing this post, I have since discovered that Sumerland Factory was opened next to Sacre Coeur Orphanage. According to islandwiki.org the factory would provide ‘lessons in housekeeping, sewing and knitting for the older girls in the orphange.’

I know that my grandmother lost her mother when she was only 9 years old and that at some point she and most of her siblings went into orphanages. I have not been able to find out which ones exactly or the dates but it makes sense that she is working for Sumerland Factory which is right next to Sacre Coeur Orphange.

Check out this photo, maybe your grandmother or another relation is in the photo somewhere?

Did they come from the Orphange too?

If so let me know, I would love to hear from you.