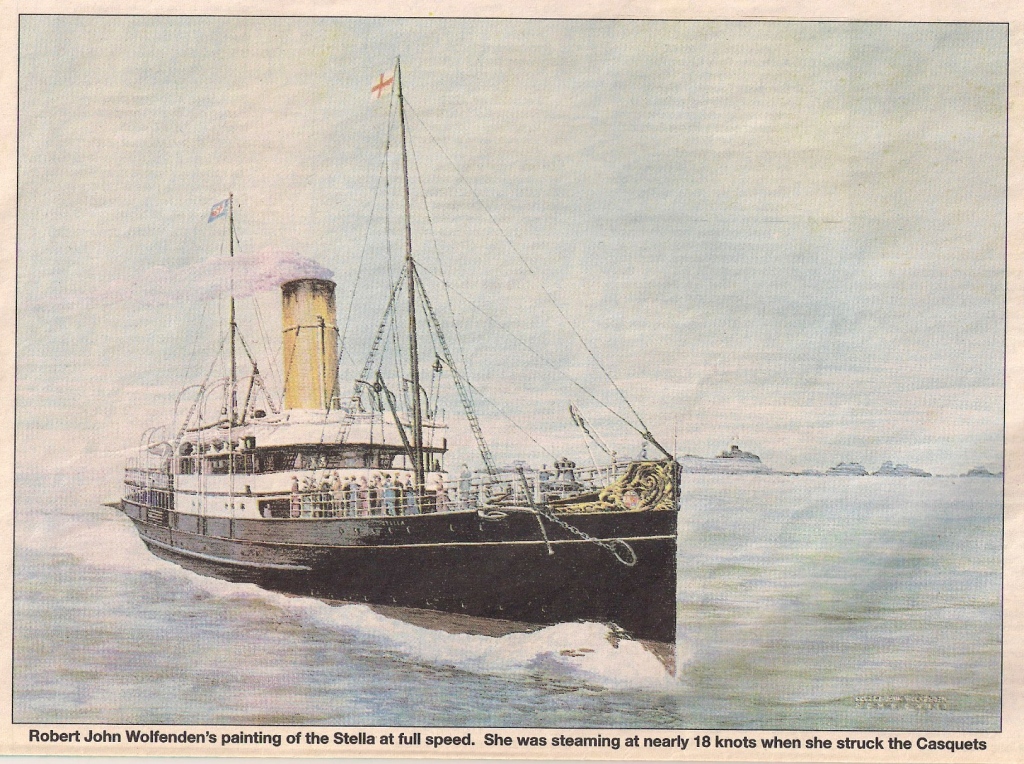 On this day, 30th March in 1899, the passenger ferry SS Stella sank within minutes of crashing into rocks on the casquet reef, west of Alderney. One of the crew members that went down with the ship that foggy Thusday afternoon was a W. Davey, son of Captain Davey of the Brig Union. Sadly W. Davey left a wife and five children behind. In my research I have been unable to find a link to my Davey family, it may be that there isn’t one.

The ship wreck would have affected many families within the Channel Islands as well as England, and this disaster would have felt even more painful due to the lack of communication at the time. The first inkling that something was wrong to the people of Jersey was by way of a telegram put up in the window of the General Post Office. The day after was also ‘Good Friday’ and therefore no newspaper had been written or published. This resulted in the Evening Post staff going in to the office to print off a special edition with the words ‘The Stella gone down…’

Missing lists continued to be published days after the ship went down. Identifying who went down with the ship was a difficult process, it was mainly down to family and friends asking around if their loved one had been seen. People not turning up for their booked hotel rooms was another way of identifying those who drowned. Click on this link to see the list of  Passengers and Crew Lists, Saved and Drowned.

As usual in times of disaster there were many stories of bravery, but the sadness must have had a huge affect on such a small community. Captain Davey loses his son W. Davey. But that doesn’t appear to be the only tragedy that has occurred to this family. If you look at the photo below you will see another member of the family has been lost at sea. Something I feel was a sign of the times and a hazard of the job.

The 19th century was Jersey’s busiest time for it’s shipbuilding industry, and if the men of the island weren’t building the ships than many were sailing, fishing  or working on them. So Captain Davey loses his son in 1899 at the young age of 35 years old, he himself dies in 1912 at the age of 69. Then there is another Captain in the family, William Davey who is ‘lost on a voyage from Spain’ in 1915, aged 73 years. The women of the family had a lot to deal with in those years.